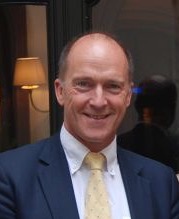 Major General Jonathan Shaw was educated at Trinity College Oxford where he read Politics and Philosophy.  On discovering he hated working in the City, he joined the British Army in time to fight in the Falklands campaign with the Parachute Regiment.  He then went on to serve with the SAS and SBS, eventually becoming the Director of Special Forces in 2003 as well as the Colonel Commandant of the Parachute Regiment.  He saw active duty in Northern Ireland, Cyprus, Bosnia, Kosovo, Iraq and Afghanistan.  He served in Whitehall in many staff appointments, his last being the Assistant Chief of Defence Staff (International Security Policy) which latterly involved being the first head of Defence Cyber Security.  He retired in 2012, and now chairs Optima Group (an explosive clearance company) and undertakes public speaking engagements.