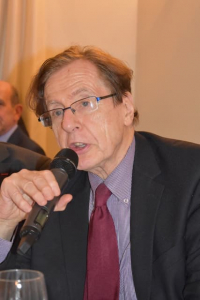 Jean-Louis Gergorin’s career has been dominated by international and industrial strategy. Educated at École Polytechnique and École Nationale d’Administration,‎ he was also a research fellow at the RAND Corporation and the John F. Kennedy School of Government‎. A member of the Conseil d Etat, Jean-Louis Gergorin co-founded and subsequently headed the Policy Planning Staff of the French Foreign Ministry. Later he joined the aerospace group Matra as Senior Vice President for Strategy and then he played a major role in triggering the formation of EADS, now Airbus Group. Today, Jean-Louis Gergorin is an independent consultant and teaches at SciencesPo.